The Gift of Travel 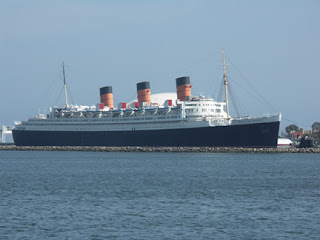 One of my earliest childhood memories was a round trip trans-Atlantic crossing aboard the Queen Mary in 1950. In those days traveling by ship was still the most common way of going between New York and London. It also was the least expensive. I suspect the later had more to do with it than anything else. But regardless of why we traveled by ship I'm glad we did.

As young as I was then I still have fond memories of that trip and of one done a couple of years after that. I suppose what made it so memorial for me was that we celebrate Christmas on that crossing and Cunard went all out to make it special for us children. There were balloons, gifts, a "real" Santa Claus and all the holiday treats of a distinctly English Christmas. Even today, there is nothing quiet like Christmas on board one of Cunard's Queens.

We were fortunate enough to have an outside cabin (my mom would have had no other . . . her claustrophobia just wouldn't allow it). Now our outside cabin didn't have a balcony or even a large picture window. It had a large porthole that the passenger could open and close as desired.

As you might guess that same claustrophobia that made an outside view essential also demanded that the porthole remained open most of the time. After all, according to my mom, we needed that fresh North Atlantic December air in the stateroom.

For me, it was an opportunity to not only see outside but to go outside. After all everyone wants to see what's on the outside of the ship. Fortunately for me by the time I was just about ready to topple out she snagged me by the leg and pulled me back inside. I am here to tell you that people who say there's nothing to do on a cruise have never been right. You can always find something.

Now I have been on may cruises since then. I've sailed aboard the great ship "Stella Solaris" as we visited the magnificent Greek Islands: I've been on Carnival's Funships; I've enjoyed Holland America's Classic sailing; and enjoyed Celebrity's wonderful service. On and on I could go. Each and every one of these sailings has given me some wonderful memories.

You can also be in that business by giving the gift of travel. Give a fruit basket and once it is gone it is forgotten . . . Give a cruise and they will still be talking about your gift years later because you gave not only a cruise but a life experience.

In 1974 while on a 15 day Mediterranean Cruise aboard the ship Orpheus when we made our stop in Alexandria. I was sitting in an upper deck bar waiting for them to call me for a tour of Cairo for which I had signed up when they announced an optional trip to Luxor. The man sitting next to me asked if I thought it was a worthwhile trip and I said it was. He then said at his age he thought it my be too strenuous for him as much as he would like to go. He then asked, "Are you going?" I answered, "I'd love to but it's just a little too pricey for me." Then the most amazing thing happened (remember this is 1974 long before the "pay it ahead" concept and been born) he reached in his pocket handed me some money and said, "You go in my place." I did and thoroughly loved the trip. Still talk about it today.

I tell that story for two reasons. First it illustrates that the gift of travel creates memories that last a lifetime. See that happened in 1974 and I still remember the experience as if it happened yesterday. The second is to illustrate that when Mr. Hughes gave me that trip to Luxor he didn't just pay for a trip . . . he gave me the gift of a life experience that has produced some wonderful memories.

And that's what I am suggesting you consider doing. Give someone special the gift of a life experience that has the potential for producing some wonderful memories. This Christmas give something significant . . . give the gift of travel.

You don't have to pick the trip, set the date or anything like that to make a gift of travel. You can give them a voucher (gift certificate) and let them schedule a date and trip the recipients wants to experience. Now there is a gift that is worth giving. And like the "Shake 'n Bake" commercial says, "We can help."

By the way, travel makes a great anniversary or birthday gift. In fact it is a great way of marking any special occasion. I especially think that it is a great gift that children pool their money and give their parents a wonderful experience. We can help you with that.
Posted by David at 10:37 AM No comments: